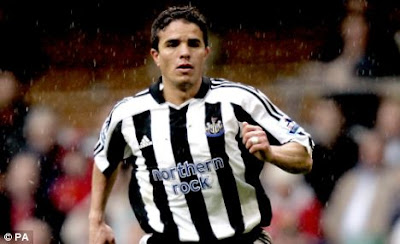 Laurent Robert (born 21 May 1975 in Saint-Benoît, Réunion, France) is a French Footballer who played for Newcastle United from 2001-2006.

The left winger was known for his electric pace and ability to score goals from long range and was a set-piece specialist. Robert signed for the Toon Army from Paris St. Germain in 2001 for a fee of £9.5 million and quickly became a fans favourite.

GOAL-DEN TOUCH
In the 2003-04 Premier League season Robert, who had already made spectacular goals his trademark, scored a remarkable overhead-back heel goal against Fulham in a 3-1 victory at St. James' Park.

This goal was used in the movie Goal! 2: Living the dream... as a goal by fictional Newcastle United striker Santiago Munez. This was the second of Robert's goals to be attributed to Munez after a spectacular free kick he scored against Liverpool was shown as a strike by Munez in the original Goal! movie.

Despite his undoubted ability Robert was often criticised for his work rate and labeled as lazy by many Toon fans. Often supporters were left to ponder which of Robert's split personalities would turn up from game to game.

ACRIMONIOUS DEPARTURE
In the summer of 2005 Robert fell out with Newcastle manager Graeme Souness and was subsequently loaned to Portsmouth for the season. During the loan spell he fell out with the south coast club's management by refusing to take a place on the bench in a match against Sunderland, storming out of the ground and returning to Newcastle for the last few games of the season.

The fall-out eventually led to his permanent departure from Newcastle and he joined Portuguese side Benfica. Since his departure from the North East he has had spells at Levante, Derby County, Toronto FC and Larissa.

After his final appearance at St. James' Park, Robert striped down to his underwear (right) and ran the length of the pitch in a bizarre display of his affection for the Newcastle fans. The gesture was warmly received by the Geordie faithful.

In December of 2009 rumours abound that Robert was looking for a return to Tyneside with English newspaper The Daily Mail reporting that the Frenchman had enlisted Newcastle winger Fabrice Pancrate to help him orchestrate a move back to the club.

However the transfer did not materialise and at the time of writing Robert remains a free agent.