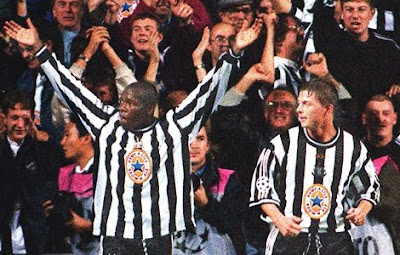 Newcastle may not have had as many historical and momentous European nights as some clubs but few could predict that their first ever Champions League match would turn out to be one of their most memorable.
After sneaking through the qualifying rounds with an extra-time victory over Croatia Zagreb, Newcastle were promptly drawn in a group that contained Ukranian champions Dynamo Kyiv, who boasted a young striker by the name of Andriy Shevchenko in their team, Dutch side PSV Eindhoven and La Liga runners-up Barcelona.

Having been drawn in the so called 'Group of Death' for their first ever Champions League campaign in the 1997-98 season, the Magpies task was made even more daunting when the fixtures revealed their first game would be against Spanish giants Barcelona.

The Toon had to face a team of living legends that included names such as Luis Enrique, Rivaldo and Luis Figo.

With many people expecting Barcelona to run riot over the European rookies Newcastle walked out to a packed St. James' Park with little pressure on their shoulders. The relaxed atmosphere amongst the Newcastle squad was clear for all to see as winger Keith Gillespie soon put his mark on the game.

The Irishman took the game to the Spanish side and their left-back, and supplied a constant threat with his incisive running and pin-point passing. However there was one man who would forever have his name associated with the fixture, Faustino Asprilla.

The Colombian forward had lit up St. James' with some outstanding displays of flair and trickery which combined with his electric pace had struck fear into the hearts of many a Premier League defender.

It was Faustino's pace that allowed him to make the incisive breakthrough for Newcastle in the first half, latching onto a through-ball before knocking the ball past the Barca 'keeper and winning a penalty.

Legendary official Pierluigi Collina pointed to the spot and the Colombian picked himself off the floor to take the spot-kick. The South American hitman calmed his nerves and readied himself to take the spot-kick, only to be ordered to re-spot the ball by the Italian referee. However even this couldn't sway Tino's focus as he firmly struck the ball home and give the Magpies a lead in the 22nd minute.

But it was to get better for Asprilla and Newcastle when Gillespie beat his man down the right-flank before delivering a dangerous cross to the edge of the six yard box. Tino lost his man and rose highest to head home his and his club's second of the night before half-time.

In the second half Newcastle weathered a storm from the Spanish side before Gillespie picked the ball up in his own half and started on another thrilling run down the flank. A quick burst of pace saw him beat the defender and leave him for dead as he advanced towards the penalty area before delivering another divine cross for Asprilla to head home in a carbon copy of Newcastle's second.

Asprilla wasn't the only one doing somersaults as every member of the Toon Army celebrated an incredible result. The hat-trick ball went to Tino and despite a fight back from Barcelona, that saw Luis Enrique and Luis Figo grab a goal each for the visitors, Newcastle saw out the game and picked up a historic victory.

The game remains fresh in the minds of many a Newcastle fan as one of the greatest nights in Newcastle's history and the performance of a certain Colombian means his name will forever be synonymous with European nights at St. James' Park.