Newcastle secured an unbeaten home season as they drew with Ipswich. In fact the Tractor boys' point is only the fifth point to leave St. James all season as the season to remember rolls on.

Ipswich somewhat spoilt the party atmosphere on Tyneside with Jonathan Walters stoppage time equaliser but at the end of the day the Magpies can be immensely proud of what they have achieved.

There have been many great moments to look back on with the season starting brightly at St. James'. The opening day's creditable 1-1 draw with West Brom was well and truly put in the shade as Shola Ameobi announced himself as a genuine threat.

Two headers and a penalty gave Shola his first career hat-trick and instantly transformed himself in the eyes of many a Toon fan. 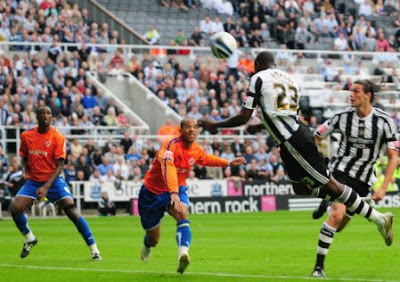 USE YOUR HEAD: Ameobi scores the second of his three goals against Reading
Lovenkrands cup hat-trick against Plymouth, and the 5-1 and 6-1 thrashings of Cardiff and Barnsley respectively also sit in the mind rather nicely as does the feeling of pride I held when Newcastle twice fought back to a draw against a confident West Brom side in mid-January. The result kept us six points clear of the Baggies at the time and in the context of the season was a massive point.

But nothing can trump the memory of Jose Enrique's goal against Nottingham Forest. The Spaniard's strike pushed Newcastle an unassailable 13 points clear of Forest in the race for promotion and was unofficially the moment we returned to the Premier League.

At the time I spoke about the visible relief from the the men in black and white as the team celebrated with a ten man bundle on top of the full-back and ever since that goal today has seemed inevitable. 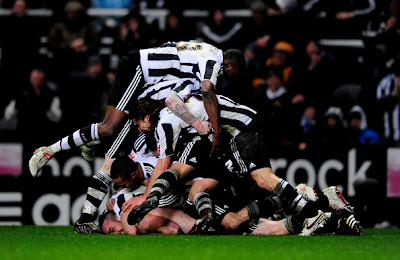 BREATHTAKING: Enrique admitted he couldn't breathe during this celebration
There is one more target for the Magpies as they make their final trip of the season to Loftus Road next week to face QPR. A single point will take the Toon to 100 for the season and put them amongst the best ever Championship teams.

But today, as the Newcastle players gather in the centre of the St. James' Park pitch and lift the league trophy high above their heads, they can rest assured they've done their fans proud.