Hello, I tried this once before and it worked superbly so i thought I'd have another go.

Unfortunately this blog has pretty much fallen away over the last 12 months due to job and family commitments but I am relaunching my writing career with a book.

The topic focuses on what makes a club a 'big' club and, without giving to much away looks for a way to resolve the issue once and for all. As Newcastle fans we've long been the centre of this age-old debate, with our inability to bring home silverware regularly being contrasted with our fantastic support as others try to determine whether we are a 'big' club or not. In fact I've got a whole chapter on it!

Anyway, to the point in hand: research.

If you could all put aside your bias to one side and fill out this short survey it'd be a great help to an aspiring writer.

First 100 respondents get a lifetime of love and respect from yours truly. 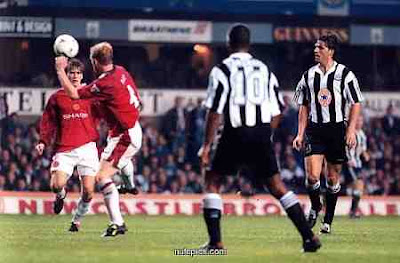 After showing their Best against West Ham in midweek, Newcastle were brought brutally back to Earth with a crushing defeat to League Two Stevenage Borough in the FA Cup Third Round on Saturday.

Newcastle never looked good enough to see off a superb Stevenage side who totally outclassed a side sitting a mere 74 league places above them, and thoroughly deserved their 3-1 win.

More bad news came in the shape of a red card for midfield powerhouse Cheick Tiote, who could have little complaint at his dismissal for a flying lunge, that will now see him miss next weekend's massive Tyne-Wear derby.

The Magpies have been frustratingly inconsistent all season, as just a fleeting glance at our results shows. A home loss to Blackpool was followed by a Ben Arfa inspired win away at Everton. A 4-3 league cup win over the champions at Stamford Bridge was followed by defeat at home to Stoke City while our win away at Arsenal was followed up by another home defeat, this time at the hands of Blackburn Rovers.

It was shaping up to be a good weekend at about five o'clock yesterday evening after both Sunderland and Middlesbrough had crashed out of the cup to lower league opposition. Yet, instead of cruising into the fourth round we compounded those defeats and rounded off a bitterly poor weekend for North East football.

After defeat at Spurs I said there was no need for Toon fans to panic, and I would reiterate those claims today. Yes the banter will be nearly unbearable at work on Monday morning and no the media will never miss a chance to drag up footage of this game as an example of the 'magic of the cup' but that's football and occasionally you have to take one on the chin.

The bigger picture shows us sitting eighth in the league and, as I've already mentioned, with some impressive performances under our belts. What we do need to do is add a little more quality to our squad and maybe show a couple of players the door. Alan Smith looked a shadow of the man who captained the side for much of last season and James Perch, whilst admittedly out of position, isn't good enough to cover for Jose Enrique.

On the plus side Tim Krul again looked like a good reserve keeper, pulling of a superb save in the first half of the match, but has now gone seven games without a clean sheet. In contrast Steve Harper kept two in a row after his return from injury and perfectly illustrated the difference between a first-teamer and a reserve player.

That said, the team that Alan Pardew sent out was one that should've strolled past the League Two side, a centre back we paid £10 million for in Colo, a striker fresh from a SJP hat-trick in Leon Best and a midfield duo who are being mentioned in the same sentences as the words 'England' and 'squad' in the shape of Kevin Nolan and Joey Barton.

Pards' excuse for the game was tiredness, saying his players were "running on empty", but I don't want excuses. I don't even want an apology. I just want a performance to show the players were hurt and a result that can make me forget about this defeat.

You don't often get such a quick chance to make amends, but that is exactly what the players will have when they take the short trip to Sunderland next weekend.

The Toon will have to be at their very best when they take on a Sunderland side who have plenty to prove to their own fans after their crushing defeat at SJP in October, as well as suffering an equally embarrassing cup exit yesterday, losing at home to a team that usually wear black and white stripes.